The Moon enacts the role of The Seven of Swords tarot card, Moon in Aquarius, during the short period from Monday, February 4, 2019 starting at 11 p.m. and lasting through Tuesday, February 5, at 7 p.m. Many depictions of the Seven of Swords: Moon in Aquarius card illustrate the meaning of theft. But the card is more complicated, exploring ideas of delusion of self and others, inviting us to question what we perceive as fact. I provide the correspondences for you to practice ritual work to help you explore these ideas. Be sure to check out all the articles on tarot card astrology.

Seven of Swords: Moon in Aquarius

The Moon governs emotions; Aquarius is highly logical. Aquarians intellectualize, analyze, and categorize emotions, but rarely feel them. However, Luna rules this face of the fixed air sign. As mentioned in a previous post, the symbolism for the decanic rulerships is being alone in a foreign country with no friends or connections, but surviving entirely through your own determination and self-reliance. This is the third, mutable decan of the fixed air sign. The mutable decan of a sign transitions out of one sign and into the next, in this case leading us from the strict rationality of Aquarius, giving way to the drifting emotions of Pisces.

We have previously discussed Pisces, the last sign of the zodiac, as expressing the qualities of gestation. If one were to imagine a plan coming together, there is a distinct sequence from the far-shooting goals of Sagittarius into the down-to-business structuring of Capricorn through the grounded idealism of Aquarius. The traditional Saturnian rulership of Aquarius reminds us to start our utopic visions from the most durable foundation. It seems that if this foundation is not put into place by the fixed portion of the sign, ruled by mental Mercury as previously discussed, then the Moon misleads, lulling the pointed Aquarian logic into misty dreams on the verge of Piscean sleep. If we want to achieve our goals, we must shake the drowse from our head, pour another cup of coffee, and persevere. Otherwise, if we should sleep, all our plans retract, re-enter the gestational phase, and must develop through the entire cycle again. The Moon loves circles. We could even say that the revolving Moon misunderstands Aquarian revolutions!

Image of the Seven of Swords

A figure tiptoes away from the colorful tents of a camp. He carries seven swords awkwardly, looking over his shoulder at two swords stuck in the ground behind him. In the distance, a council crouches in a circle, one of whom has risen, holding his spear upright. Clarity is clouded in this Moon-ruled image. Luna deludes, and what might appear to be obvious by Aquarian standards is open to interpretation.

What kind of a camp is this? Without a doubt a camp indicates travelers, not the residents of the land. The standard interpretation of the card is that a thief is stealing something. But has the man with the swords stolen them, or is he retrieving the rightful property of his tribe, plundered by invaders? If someone tells us what we see, we tend to see it that way. But when another re-defines the circumstances, we see it differently. What are the facts? How do we uncover the truth?

Title of the Seven of Swords: Unstable Effort

There is a distinct diagonal line in this image, extending from the toe of his left foot in the lower left corner, past his outward turned nose and the hilt of the topmost sword. This line draws the action backwards. He leans not forward into his escape, but appears to be pulled from behind. The direction of movement suggests the action is not complete, that he is reconsidering. Generally, readers suggest that he contemplates grabbing the two remaining swords, which would certainly overload him. The action of this scene is captured at a moment of instability. A likely getaway could be stymied by greed for getting just a bit more. Does the council in the back see him? If he hesitates, he will surely be apprehended. An unstable effort is one that is likely to come crashing down.

The Astrology of the Seven of Swords

The Moon governs the tides, the ebb and flow of cycles. Just as it is proper to build a house on a foundation of stone, it is an unstable effort to build on the shifting sands of a twice-daily submerged shore. Curiously, the two left-behind swords offer the solution used by world cultures who must build on the Piscean coast — stilts. Elevating a house reduces the impact of the surging and receding tide. Aquarius is represented in the tarot court by the King of Swords, frequently shown elevated on a hilltop or high among the clouds. It seems the lunar pulled crash of the tide fells the lofty one. Moon in Aquarius washes out the scaffolding of our incontrovertible science.

The Moon is not a clever trickster like Mercury, but instead veils the truth. The Mercurial trickster knows exactly what’s going on, and intentional throws us off the scent. The Moon loses herself in clouded imaginings. The result is that we delude ourselves as easily as we mislead others. Once, a student expressed confusion when she drew this card in a reading. She denied any dissembling. As we discussed it, it surfaced that she had booked a moving truck so she could vacate the apartment she shared with her boyfriend. However, she had not told him that she was leaving. Certainly there are times when it’s necessary to withhold the truth. But nevertheless, Aquarius needs a firm understanding of what you are doing and why. The Moon hides this, even from ourselves. When you pull this card, consider how your own logic might be pulling the wool over your eyes.

Mythology of the Seven of Swords

Maybe it’s because I recently watched Season 5 of Grace and Frankie, but the story that comes to mind for the Seven of Swords: Moon in Aquarius is Don Quixote. In this season of the show, the Martin Sheen character desperately wants to play the lead in Man of La Mancha, convinces the producer to do the show, wins the role, then loses it to a novice whom he had encouraged to join the acting company. The machinations needed to get the show chosen, then the ironic loss of the role to someone he had promoted, is an apt Seven of Swords scenario.

But the character Don Quixote himself has the Moon in Aquarius qualities. He embodies the Aquarian disposition of being idealistic, seeing a perfected, rarefied world around him. But rather than creating this world, bringing it into being on the material plane as the Saturn-ruled sign must do, he is lost to his flights of fancy, the lunatic phantasm.

Ritual for Seven of Swords: Moon in the Third Decan of Aquarius

If you would like to engage the qualities of Moon in Aquarius to better understand fact versus delusion, consider doing ritual work with the Seven of Swords. Develop your own ritual using the correspondences below, or consider adapting the one I outlined in this previous Moon post. Below are the correspondences for you to work with.

The Aquarius tarot card astrology trilogy will conclude with Venus in the first decan of Aquarius, from March 1 to 9, 2019. In the meantime, I’ll post a couple of the Pisces decans. Stay tuned!

Joy Vernon is widely recognized as an expert tarot teacher and respected community leader. With over twenty-five years’ experience teaching energetic and esoteric modalities, Joy brings expertise and practiced familiarity to her specialty of esoteric tarot, which layers astrological and qabalistic symbolism onto the traditional tarot structure. Under her leadership, the Denver Tarot Meetup grew into one of the largest and most active tarot-specific meetups in the world. Now Joy runs the Greater Seattle Tarot Meetup. Joy works as a tarot reader, astrologer, and teacher in Burien, Washington. To learn more, please visit JoyVernon.com.

Enter your email address below to subscribe to our newsletter

Tip your tarot tutor! Did you learn something from these free articles? Discover a practice that creates deeper connection? Flash on a light bulb moment? Please support my work and encourage future insights by making a one-time (or recurring!) donation.

Reflective Retrospective: How to Create Your Own 2023 Tarot Spread 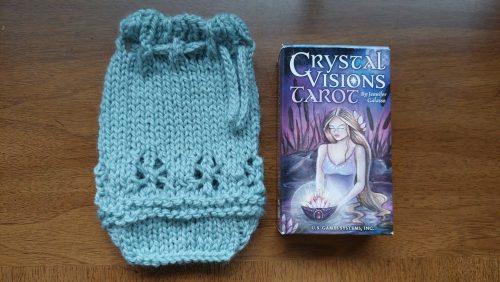 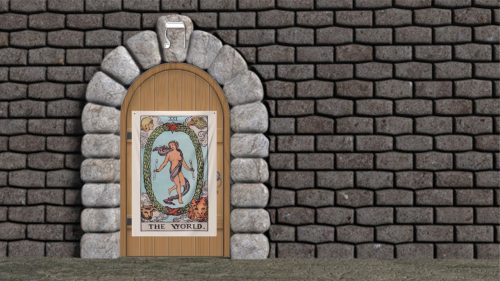 Using Magical Doors for Skrying on the Tree of Life

How To Work with Magical Images 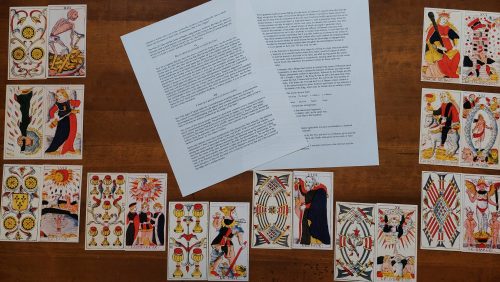 The Great Granddaddy of Tarot Spreads